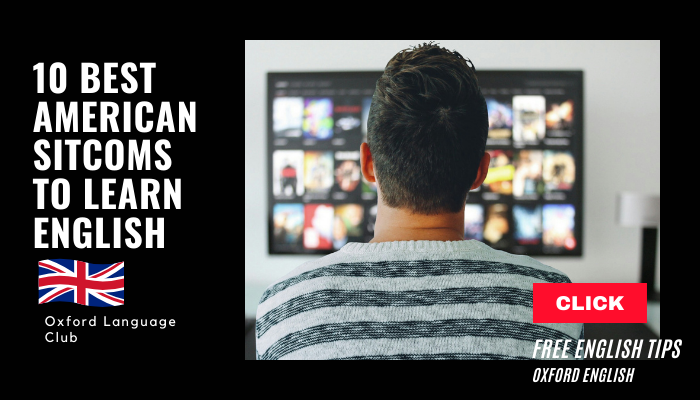 Watching TV sitcoms is one of the best ways to improve your English vocabulary and to learn how to speak English more fluently.

(“Sitcom” means “situational comedy”–they’re about people sitting in a familiar place, and having a laugh.)

There’s no better way to learn American slang and how people really talk.

Get ready to get in touch with “real” English–the English you hear on the streets or hear from your friends.

Who hasn’t heard of Carrie, Samantha, Miranda and Charlotte? The four fun-loving women from New York. This is perhaps one of the most romantic sitcoms that has ever been aired (played on TV) or at least lasted the longest.

Why it’s great to learn English from “Sex and the City”: “Sex and the City” is a fun and enjoyable watch and it doesn’t take so much concentration. The more you enjoy a show, the easier it will be to learn from it. The language is simple and they use many phrasal verbs, which will help you to understand the context of these otherwise tricky phrases.

The English that’s used in the show is natural and typical of NYC, so if you’re planning on heading to the Big Apple, this series is a must-watch. It also deals with a few interesting storylines which relate to modern everyday social issues in the US, such as safe sex, friendship and romantic relationships which will help you to understand some important cultural differences between your country and the USA.

If you haven’t watched “The Big Bang Theory” yet, you’re completely missing out on some awesome TV time. It’s about a group of nerdy friends who work together at the university carrying out different kinds of scientific research and experiments.

Why “The Big Bang Theory” is great to learn English: It’s hilarious and you don’t even need to understand everything that’s being said to understand what’s going on because the actions are clear. You’ll be able to hear and understand everyday slang in context such as “What’s up?”

And if you’re particularly interested in science, you can pick up a lot of vocabulary related to the topic. Because it’s set around a university campus, you’ll also get a feel of what it’s like to learn in an American college and some of the language that students use.

This is an interesting and funny series and in the beginning it’s a little bit difficult to understand because it’s set in the future–in the year 2030. However, once you get used to the idea of a show being set so far ahead of time, you’ll really enjoy it!

Why “How I Met Your Mother” is a great sitcom to learn English from: Despite the complex time issue, this is a very easy series to understand once you understand the idea of it. There’s a narrator throughout the series (Ted) and this helps explain what’s going on.

It’s an entertaining show and uses a lot of humor and everyday language. For example, you’ll hear words such as “high five,” “legendary” and “awesome” being used a lot. This is also a great series to watch in order to understand American culture regarding dating and romance. Barney, the womanizing friend, is incredibly funny. You’ll fall in love with his character immediately, which will have you wanting to watch the rest of the series.

“Ugly Betty” is a fun show aimed at the younger crowd, but that’s not to say older people won’t enjoy this lighthearted American sitcom too. Its main character is Betty Suarez (America Ferrera), a kind and sweet Latino girl from Queens, NYC.

Betty is sweet, but she’s also lacking in basic social skills, confidence and a sense of fashion. (Some of her outfit choices are ridiculous!) She goes from just being a typical unpopular girl to a personal assistant at Mode magazine, based in the coolest part of NYC: Manhattan.

Why “Ugly Betty” is a great sitcom to learn English: “Ugly Betty” is easy to follow, especially since a lot of the focus is on Betty’s family—whose first language is not English. It’s also a great way to learn specific vocabulary related to fashion, magazines and publishing.

As the name of this American sitcom suggests, it is set in the 1970s, when rock music and hippies were popular. One of the main characters is Eric Forman, who is a typical American high school student growing up in the ’70s. It focuses on his life, his friends and his family. They are a typical group of teenagers that experience normal teenage emotions such as happiness and sadness.

Why “That ’70s Show” is a great sitcom to learn English: This is a funny show but at the same time it’s very realistic and shows the lives of normal teenagers. It’s full of everyday English that young people use and you’ll also see how people who don’t speak English as their first language can make very funny mistakes if they don’t understand the language properly through the South American foreign exchange student, Fez.

“Grey’s Anatomy” is America’s most loved medical sitcom. It follows the main character, Dr. Meredith Grey (Pompeo), and how she started her residency (her in-house training to become a doctor). It follows her training and takes the viewers through to when she eventually graduates and becomes a qualified surgeon.

Together with the other surgeons at Seattle Grace Hospital, they deal with different medical issues in every episode. There’s also a great amount of drama that will keep viewers interested and it follows the deaths of some of the main characters, romantic relationships, personal problems and work issues.

Why “Grey’s Anatomy” is a great sitcom to learn English: “Grey’s Anatomy” has a number of different relationships and there’s a lot of one-on-one dialogue between the different characters which makes it easier to follow as group conversations are often more difficult to understand.

Again, “Grey’s Anatomy” uses a lot of natural dialogue and it’s a great show for learning commonly used English idioms. It’s also a great series to watch if you’re interested in health, medicine or you’re training to become a doctor or other medical professional as it uses a lot of specialized vocabulary. Unlike other shows, their use of medical English and terms is exact, which will give you more of an understanding of the context they are used in.

Almost everyone has heard of Ross, Rachel, Monica, Phoebe, Chandler and our favorite funny boy, Joey—the main characters of the world famous sitcom, “Friends.” While this sitcom is no longer being produced, it was and still is so popular that you can always find re-runs (repeat episodes) on TV no matter where you live in the world.

Why “Friends” is a great sitcom to learn English: This is a funny show and the jokes are very obvious which means you don’t have to understand English perfectly to get what is being said. The characters of the show are all very different and you can learn some excellent English to help you communicate with your friends.

The language is conversational and you’ll also learn how to understand basic humor through the dialogue. The speed of the dialogue also appears to be much slower and clearer than most other sitcoms, which makes it easier for all of you trying to learn English understand more.

“Glee” is a one-hour series that follows a high school teacher and his desperate efforts to try and transform his school’s Glee Club (a singing choir). It shows him trying to inspire a group of performers who appear to lack talent in the beginning to work hard in an attempt to try and reach the national singing competition. In the past his school used to have the number one choir but there were a number of different scandals which resulted in the choir failing and only attracting kids who were a little strange or didn’t fit in with the rest of the school.

Why “Glee” is a great sitcom to watch to learn English: It’s been proved in the past that music lyrics help learners of a language learn better as there’s a lot of repetition and the songs are catchy (easy to remember). “Glee” will help you with your pronunciation as the music teacher is shown taking the students through different lessons of pronunciation to help them with their singing. The songs from this hit show will help you memorize English better and it will even help you with intonation.

“Gossip Girl” is a popular American teen drama TV series that was originally based on the book series called Gossip Girl written by author, Cecily von Ziegesar. The series has a narrator, who remains unknown to the very end of the series and goes by the name of Gossip Girl. The series focuses on a group of rich high school kids who live in the richest part of Manhattan in the Upper East Side.

Why “Gossip Girl” is a great sitcom to learn English: “Gossip Girl” is easy to follow because it has a narrator explaining the beginning and end of each episode which will fill in all learners of English whatever they’ve missed. The language is cool and casual and it’s a great example of how young American people communicate with each other.

“Desperate Housewives” is a fun drama that is set on a small suburban street called Wisteria Lane in the fictional (not real) town of Fairview. This cleverly written drama follows the everyday lives of a group of very different women. It has an interesting take and it’s narrated by a woman who died in the first episode aired.

The story spans across 13 years. The viewers are able to become part of the ladies’ lives and watch their everyday domestic struggles in the home with their families. "Desperate Housewives" is full of drama and there are many secrets on Wisteria Lane with many crimes and love affairs happening.

The show switches between formal and informal contexts and therefore, you’ll be able to improve your listening skills in a number of different situations. The language used is colorful and it can improve all levels of English and you’ll be able to hear popular sayings such as “it serves him right” and “I want to take a rain check.” (I want to miss this time because I have something to do).