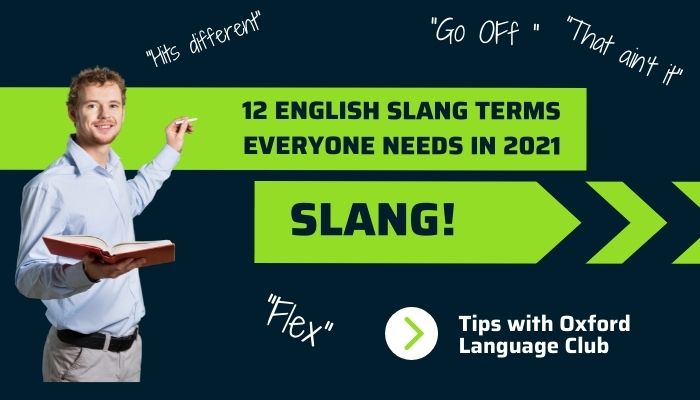 Have you already said bye to old-fashioned English slang terms from 2020?

Before you start cleaning out all old slang terms to make room for new ones, hear us out: not all of last year’s slang has completely disappeared, some of these terms are still acceptable in 2021.

Let’s take a look at the some of the English slang terms you should know in 2021:

We’ve all learned a lot of new vocabulary over the last strange year or two. If you’ve had enough of seeing the word ‘Coronavirus’ everywhere, at least you can escape it on social media, where it has been transformed into the infinitely more appealing ‘Miss Rona’. For example, if you are going to miss out on doing something, you can blame it on ‘Miss Rona’ – as in, ‘The gig has been cancelled, thanks to Miss Rona’.

This may be an oldie but it’s still relevant for 2021. In English, you ‘flex’ your muscles when you’re showing them off. A ‘flex’ should also be used anytime you’re being a showoff or being extravagant. So, that Instagram picture showing off your views on your last trip? You were flexing there.

When you see something that’s just plain wrong, whether it’s someone taking a joke too far, or doing something that makes you think ‘ewww’, then ‘that ain’t it’ is the phrase you need.

‘Mutuals’ are two people who follow each other on social media. Shared interests mean they provide a mutual support network online, and people will often call on their ‘mutuals’ to help raise the profile of a band or singer, for example, or to get enough replies to make their post trend.

If you’re ‘sleeping on’ someone or something, you’re not giving them the attention they deserve or failing to appreciate them. It’s often used to highlight what’s being ignored or overlooked; for example, someone might say ‘don’t sleep on this song – it’s amazing’!

Sometimes, a plain old ‘yikes’ just doesn’t cut it. When you’re really surprised or embarrassed or even amazed, you will want to yell ‘big yikes!’ This versatile phrase has already been around for a couple of years and is the perfect response to statements from ‘How did your driving test go?’ to ‘Is that your ex-boyfriend?’.

We can all get annoyed, but if you lose control, you might ‘go off’, which means to have a rant or complain angrily. Perhaps you’re getting really bad service in a restaurant or a shop and lose your patience. This phrase has been around a long time, but it’s definitely having a moment this year!

A boy who will do pretty much anything to get a girl to show him some attention might get called out for being a ‘simp’. The term is hotly debated because, let’s be honest, shouldn’t we be celebrating people who do nice things? You can also use the phrase ironically to show you much you like a particular celebrity; for example, “I’m simping so hard over Billie Eilish”.

CEO really means ‘Chief Executive Officer’, but TikTokers have begun calling other TikTokers the ‘CEO of’ anything random in the comments section on videos. Is the video of a dog doing something cute? That’s the ‘CEO of good boys’ right there. That viral video of the skateboarder drinking cranberry juice? He was definitely the ‘CEO of vibes’!

When you just keep on going, no matter what, then you should pull out the phrase “We move”. This handy term is also be used to signal agreement, for example, if a friend suggests going for drinks, you’d answer “We move”.

Cap means lie. It started after ‘no cap’, which means ‘no lie’, became popular a few years ago. If someone posts something on social media that you know is untrue, the answer is ‘cap’. Most people use the blue cap emoji instead of the words.