4 Areas To Focus On For Advanced English 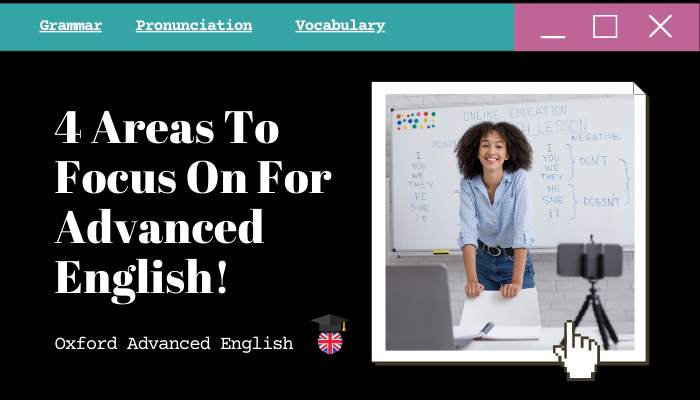 When you first started learning English, could you predict what would be difficult for you?

Did you think it would be tenses, or articles, or even pronunciation?

This lesson is inspired by the experiences of an English speaker learning French, who found some areas were unexpectedly difficult. Some of these are also true for learning English! But they’re also areas which will help you get closer to an advanced English level.

The person learning French found that whole sentences spoken fast were difficult to understand. This is also the same in English. Unstressed grammatical words are hard to hear, while other sounds either change or are “merged” into other sounds when we speak fast. For example:

“Do you know what I mean?” becomes “Dju know wha_I mean?”

“My best friend” becomes “My bes_friend”

The solution? Practise listening to spoken English as much as possible – and try to work out the meaning from the context. For extra practice, try copying spoken English yourself, so you physically feel the sounds change or merge.

All languages have differences between the formal and the informal or spoken form. For example, French (and other languages) have special tenses and subjunctive forms that you’re unlikely to hear in everyday situations.

In English, too, there’s a big difference between formal and informal styles. Formal English might have longer words, longer sentences with more clauses, and fewer abbreviations. But it’s often the informal English which causes more problems, as this is where you’ll find phrasal verbs and multiple uses of words like “get”, or “go”, for example.

The solution? Reading a wide variety of English will help you understand formal / informal English better. Try different newspapers, articles and even short stories to get practice.

English has the “th” sound which can be difficult. Often, the sounds which you don’t have in your first language will be more difficult for you in English. So this could be the difference between v / w for German speakers; l and r for speakers of many Asian languages; and so on.

It isn’t just the individual sounds, either. Consonant clusters (where you have more than one consonant, such as in the words “matches”, “strict” or “through”) can be difficult. Word stress is another area that you can focus on to improve your pronunciation.

The solution? Focus on the sounds that you find difficult. Practise these sounds not just in words, but in whole sentences so you can pay attention to stress and linking.

It’s almost impossible to separate language from culture – and when you grow up with a language, you always grow up with cultural references. These might come from television programmes, or traditions and ways of life. People make references to national news and important events, or to celebrity news and gossip. Again, listening to news stories or podcasts, and reading widely, will help you to pick up this knowledge.

Slang is also constantly changing. Here’s my latest example. You probably know that you can “friend” and therefore “unfriend” someone on social media. When someone you know ignores you, they “ghost” you. An alternative to “ghost” is to “air” someone – behave as if the person doesn’t even exist!

Although slang is almost impossible to remember and learn because it evolves so quickly, it can also be fun to use in spoken English. Choose a couple of expressions that you like, and try including them when it’s appropriate.

Brand names are another area of English which are often difficult, because you’re used to saying them in a particular way in your own language.

For example, how do you say “Nike”or “IKEA” in your language? In British English, it’s “Nike” (to rhyme with “bike”), and “Eye-key-uh”. Using an English pronunciation in English conversations will help you to minimise misunderstandings!

The solution? Enjoy the fact that English is evolving and “keep an ear out” for cultural, slang or brand words.