4 Hacks for Learning a Language Through Immersion 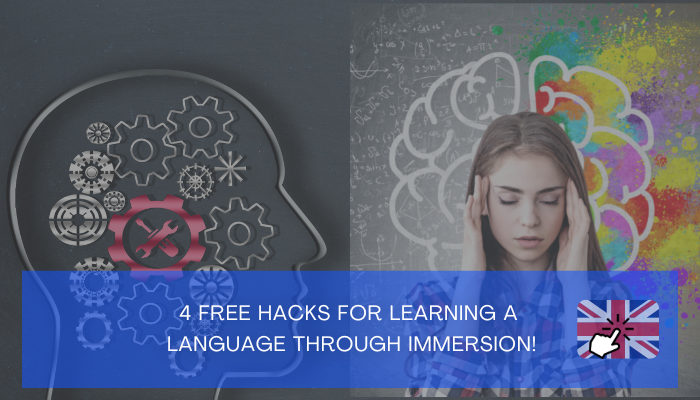 Complete language immersion is within your grasp.

You have the ability to learn a language by being immersed in it, whenever and wherever you want.

Whether you aren’t able to go abroad or whether you already are in a foreign land, these tips will still help you.

So stay where you are, and read on.

What Is Language Immersion, Exactly?

I’m sure we’ve all heard the term thrown around quite a bit and are familiar with it, but its popular meaning has changed quite a bit from its original meaning.

While you might think of language immersion as actually living in a country where they speak the language you’re learning, the term was actually originally intended to describe classrooms where the target language (the language being learned) was used exclusively.

Language immersion from the very beginning has been about learning a language outside of its spoken areas.

Let’s focus on that for a minute, because it’s really important. Language immersion is just using the language you want to learn all the time.

Somehow, we’ve come to think of living in a foreign country as some sort of mystical experience, whereby the language will creep into our brains and slowly grow itself, like some sort of beneficial tapeworm.

First of all, gross.

Secondly, the truth is that to learn a language you just have to practice. And immersion, whether at home or abroad, is one way to do a lot of that quickly.

You may already be familiar with the 10,000-hour rule popularized by Malcolm Gladwell. It’s come under a lot of flak lately, but the research on neither side is definitive, so I think it still serves as a handy guideline.

Basically, the rule says that if you study something intensively for 10,000 hours, you’ll have a good shot at being a pro. Language is no different. Study for 10,000 hours, no matter where you’re living, and you’ll be at the top of the heap.

But never forget that these 10,000 hours have to be focused. If it’s not difficult, you’re probably not learning. Watching 10,000 hours of anime with the subtitles turned on has, I think it’s safe to say, produced no masters of Japanese listening skills.

This is why you should carefully form a detailed plan, allocating a certain number of hours each day to the four main skills: speaking, listening, reading and writing.

Some time should also be set aside just for nailing down grammar and vocab.

While everyone wants to emphasize different things in their learning, it’s a good idea to be well-rounded. Working on one skill set will reinforce what you’ve learned in another.

But what should you actually do? And how can you really achieve total immersion?

Well sure, you might say. That sounds great, but language is a different kind of knowledge. You have to speak to people and most of the people you need to speak to live far, far away.

And yes, many of them will most likely live far, far away from you. But that’s starting to matter less and less.

Common pieces of technology that you use every day can be repurposed for language learning.

For example, your iPod or iPhone can easily be converted into a handy listening immersion tool. All you have to do is take a movie or television series and convert it into an audio file.

Then, when you’re out walking around, turn on the file and disappear into a world of foreign sounds. Continually finding new files and converting them might be a bit time-consuming, but it’s worth it to have your surroundings take on the tones of a distant language.

2. Letting the people come to you

Globalization. For better or worse, it seems like it’s here to stay. For language learners, this is undoubtedly a blessing.

In both the USA and the UK, there are significant pockets of recent immigrants and long-established ethnic communities that continue to speak a foreign language.

Of course, some languages will be easier to find than others. Obviously, if you live in the United States and you want to speak Spanish, the odds are pretty good that you can find someone to speak with.

But don’t rule out the less common languages! Oftentimes, you just need to meet one speaker of the language you’re learning and they’ll connect you to a whole community of speakers of that language.

One of the easiest ways to find these groups, if you’re not already in the know about a local ethnic community, is to go looking for local foundations or cultural centers.

3. Your very own immersion mindset

If you have the right mindset, you can live anywhere and learn a language.

Many an expat has lived years outside of their home country without learning much more than “Hello” and “Thank you” in the language of their new country, relying solely on English or a native spouse to translate for them.

So if that mindset is what we want to avoid, what mindset should we have?

Well, we should start with a “no English” language pledge.

This is famously used by the Middlebury College immersion program, but it’s something you can do by yourself. If you work or have one of many other legit reasons for being unable to spend all day every day avoiding English, then choose clear goals that are challenging but not impossible to accomplish, like setting aside four hours each day to read, write, speak listen and even think in another language.

Being able to internalize a foreign language is incredibly important to learning languages and learning them well.

If you want to have an immersion mindset, then naturally that mindset should be in your new language.

Remember, if you put in the effort, you can flip your everyday life inside out, leaving English safely tucked away for only when it’s really needed.

All you need is motivation, a computer, some adventurous friends and a new way of thinking.