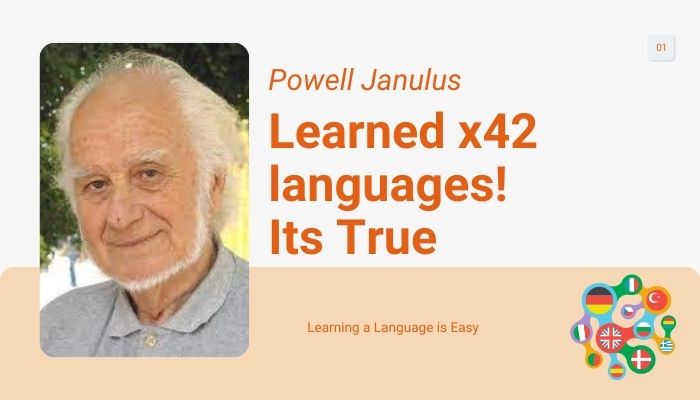 Think its hard to learn a new language? Take inspiration from Powell Janulus who holds the world record for learning 42 Languages! YES 42!

Powell Janulus was born in Vancouver, British Columbia, Canada. He was exposed to many Slavic languages as a child. His Polish mother spoke six languages while his Lithuanian father spoke at least four. He could speak 13 languages fluently at the age of 18. He attended Asian Studies at the University of British Columbia where he attempted to learn Mandarin. In an interview, he stated that he struggled with the academic teaching style. He became curious about the process of language learning and in the way that children learn languages so easily. He attempted to learn Chinese by having conversations and talking with as many Mandarin speakers as possible.

During his early 20s, he began to develop his methodology for fast language acquisition. In his 30s, he became a court translator and got paid for each language he could translate. He worked to learn two or three languages per year, as each language allowed him to earn more at his job. He was authorized by the Provincial Court of British Columbia, as a court translator in 28 languages. He stated that he later became interested in language variations and could quickly learn related languages such as Spanish and Portuguese. In his 40s, he learned less common languages such as Tibetan, Romani, Inuit and Swahili. Later in life, he opened the Geneva Language Institute, a language school in Vancouver.

In 1985, Powell was entered into the Guinness World Records for spoken fluency in 42 languages. To qualify, he had to pass a two-hour conversational fluency test with a native speaker of each language he spoke at that time. This testing took place over a one-month period. Powell stated that he considers himself skilled in 64 languages and said that he studied at least 80 languages in total. In an interview, Powell claimed that the late John Candy hired him to help him speak Punjabi for the movie Who's Harry Crumb? He once appeared on The Tonight Show where talk show host Johnny Carson invited speakers of 48 different languages to test Janulus.