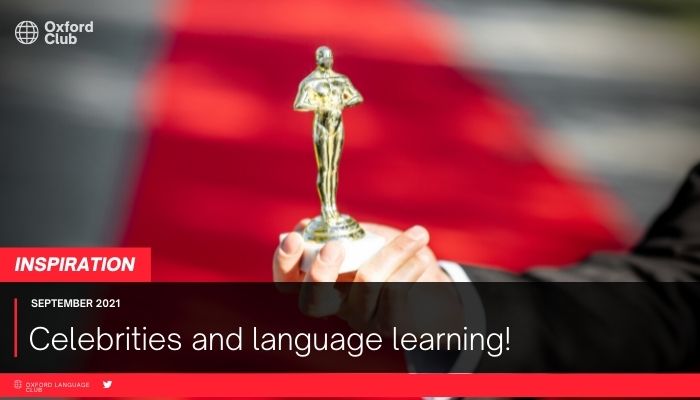 We all know that famous people come from all over the world. What we don’t realize is just how many celebrities have had to learn English as a second language on their way to fame. Here are just a few of many.

Learning English may not be something she puts front and center on her resume, but Spanish is her first language. It wasn’t until late in her childhood that Ms. Cruz learned English. Born and raised in Madrid, Spain, she is a natural Spanish-speaking actress. She now speaks English fluently with an American accent when she has to, but she loves to mix a bit of Spanish in with the English when she can.

Possibly the best thing about laughter is that it reads the same in every language! Known for making everyone laugh in too many comedy films to count, Jackie Chan was actually a movie star in China long before he made his way to America. Born and raised in China, it makes sense that Chinese is his first language. Mr. Chan is another celebrity who spent time learning English, which he is fluent in today.

Born and raised in Colombia, Shakira’s first language is Spanish. While she later learned English, she did not stop there! In fact, Shakira is also fluent in Portuguese and Arabic. Not many people can say that they are fluent in four languages, but Shakira is one of the admirable few. We all know that her hips don’t lie, and neither do her multi-lingual singing and speaking skills.

Also born and raised in Colombia, Sofia Vergara attended a private school where she spent most of her days learning English. With Spanish as her first language, she still has a very strong Spanish accent, which she is known for on the hit comedy show, Modern Family.

One of the biggest celebrities in the world today, Mila Kunis was born in Ukraine. With Russian as her first and most fluent language, she began learning English when her family moved to the United States. Today she speaks both English and Russian fluently.

With his original accent still present and an impressive resume of equal parts Hollywood and government, Arnold Schwarzenegger hardly spoke English when he moved to the United States at age 21. Born and raised in Austria, he still has a considerably prominent accent. Upon moving to America, Schwarzenegger spent most of his time learning English while competing as a successful bodybuilder.

Celebrities come from all over the world and spend time learning English. Let their success inspire you to continue with your studies, and soon you will be as fluent as the stars in your favorite movies!