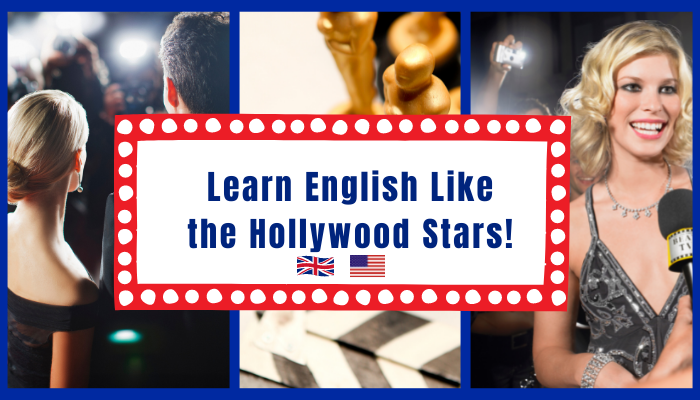 Many of the best actors in Hollywood, for whom English is not their native language, learned English in a short period of time because they had to act in an American film. It’s not surprising that such a motivation – the wealth and fame that Hollywood offers – was behind their success in learning English.  After all, they had to learn English as quickly and effectively as possible.

In this article, you’ll find out what Hollywood stars did to learn English. Take note of some of the methods they used.

Before Charlize Theron became a Hollywood star, she watched hundreds of films. This is a quick and effective way to learn English. Charlize, who is from South Africa, spoke only her native language of Afrikaans until she was 19. She learned English and set her sights on Hollywood. The actress is sure that watching English language films and television shows played an important role in helping her improve her English.

Foreign language films often have the option of watching with subtitles. This is quite helpful, as it is easier to read in a new language than to understand others who are speaking quickly. Listening to conversational speech and at the same time reading subtitles makes it easier to connect the spoken word with the written word.

TV shows and films also help people learn the most up-to-date words and slang expressions. These are things that aren’t taught in school. This is especially helpful to actors who have to play “bad guys” from the street whose speech is full of slang expressions.

Not long ago, French actress Melanie Laurent said in an interview that she had to watch Gossip Girl over and over in order to quickly learn English since she lied on her resume and said that she spoke English fluently. As a result, she got the role in Inglorious Basterds, so this method is very effective!

A language tandem is often used when someone needs to learn a language quickly. This method was used by Mexican actress Salma Hayek when she moved to Hollywood at the outset of her career. A language tandem is a method by which two people regularly meet and practice the language they want to learn. For example, a person who speaks French but has just started to learn English meets with a person who speaks English but has just started to learn French. As a rule, the first half of the conversation will be in French and the second half in English. That way, both have a chance to practice the language they’re learning.

This method proved effective for Salma Hayek when she was asked to play in the English language blockbusters From Dusk till Dawn, Wild Wild West, and others.

Method Acting and Surrounding Yourself with Native Speakers

The fastest way to learn a language still remains travelling to a country where the language is spoken and surrounding yourself with native speakers. Many people who have learned English – including some among the Hollywood elite – confirm that this is the best method.

Particularly for actors, the only way to learn how to use and pronounce slang words and expressions is to immerse oneself completely in an environment where the language is spoken. This practical approach is much more effective than any other.

Method acting refers to a group of methods widely used by Hollywood actors to better immerse themselves in the role of the character they are playing. The actor will often remain in character even when the cameras are not on. In other words, he lets the character affect his own personality, thinking, and behaviour.

This method can also be used when learning English. Imagine that you are an English speaker, and speak only in English during the course of the day. This will do much to improve your progress in learning the language.

Mastering a Local Accent or Dialect

Mastering a local accent or dialect can be a good thing to do for a number of reasons. Learning to speak in a regional dialect that differs from their own is a difficult task for many actors. For example, Hollywood actors from the United States often play British characters, and vice-versa.

Many actors hire accent consultants who work with them and help them master the right pronunciation for a role they need to play.

Unfortunately, not everyone can afford this luxury. Nevertheless, there is another, less expensive option. We can benefit from watching movies and interviews and listening to the radio in the language we are trying to learn. A huge amount of material can be found on YouTube.

Speaking is an integral part of an actor’s profession, so you can always get a lot of useful ideas from the language-learning methods used in Hollywood.

Try a few of these methods in your daily use of English, and in time you’ll see real progress.