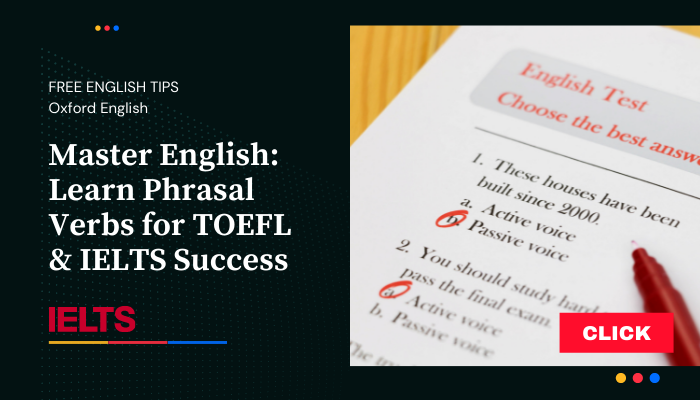 You have probably heard of phrasal verbs, and if not, you can surely work out what they are: a phrase that functions as a verb. These phrases are made up of two or three words, one of which will be a verb and the other is usually a preposition. They are used in everyday English, although they are typically more common in colloquial language than academic. Nonetheless, an English speaker cannot overlook them or he will soon be lost because there are tens of thousands of phrasal verbs that appear almost everywhere.

What makes phrasal verbs both interesting and annoying is that they are not necessarily the sum of their parts. In language, we can normally deconstruct a phrase’s meaning by its components, but with phrasal verbs this is not possible. The meaning is not usually related to the verb and preposition that come together.

In the TOEFL / IELTS exam, you will be dealing with a mixture of English types, including some formal language. This is what you will produce in the writing section, for example. As such, you should be aware of suitable phrasal verbs and also the fact that you should not overuse them or you will risk lowering the level of formality in your work. For speaking, however, you can use more phrasal verbs and also use the ones that are considered more colloquial.

As I have shown so far, phrasal verbs are an important feature of English and found in all sorts of written and spoken language. As such, knowing them will help you greatly in your TOEFL / IELTS preparation and the exam performance. Their prevalence in conversational English, particularly, will help you in the listening component of the TOEFL / IELTS, as well as the speaking test, in which you will listen and respond.

These sections of the test will contain language that is not very academic, and which tends towards the informal end of the range. For this reason, it is highly likely that you will encounter phrasal verbs in this part of the test. When you actually speak, you can also use phrasal verbs, including the most casual ones, because these are normal in typical spoken English.

When it comes to the reading and writing sections, you are less likely to find phrasal verbs, but there are some that may appear. These are more likely to be formal ones, and when you are writing you should definitely think about the level of formality in your words, and thus consider more academic phrasal verbs.

For these reasons, it is more important that you can actually understand phrasal verbs than be able to use them in your own speaking or writing. However, if you can use them, you should. Being able to use phrasal verbs with accuracy shows a level of sophistication that will impress the markers and give you a greater range of language to draw upon when attempting to express yourself.

Here are a few examples of formal and informal phrasal verbs:

Annoyingly, phrasal verbs can have more than one meaning! If you find it difficult to learn these tricky phrases due to the having a different meaning from the original verb, then this will make it seem even worse. Thankfully, though, there aren’t too many that have multiple meanings.

One such phrasal verb is “take off” which can refer to (1) the process of an airplane beginning to fly or (2) the removal of an item of clothing. It can also mean (3) to leave quickly, and if we add another preposition, the phrase “take off from” means (4) to continue or be inspired by. How confusing!

1. The plane took off after a long delay.

2. When you’re in Thailand, you should take off your shoes before going into a house.

3. She took off without saying “good bye” to anyone.

4. The new book took off from where the previous one finished.

When you are learning a new phrasal verb, you should attempt to learn it from context and check its meaning with a reliable dictionary.

One final point to make about phrasal verbs: some of them are separable and some are inseparable.

What does that mean?

To separate some things means to move them apart. This is happens to some kinds of phrasal verbs. When you can put other words between the verb and preposition, it is called a separable phrasal verb, but when you cannot do this it is called inseparable.

Let’s take the verb “turn on”, for an example. This is a transitive phrasal verb because it can take an object, such as “the light” or “your computer”. It is also separable, so we can put the object after it or between the verb and preposition:

On the other hand, we have phrasal verbs such as “look after”, which are inseparable. They can take an object, but it can only go after the phrasal verb and not in the middle of it:

If you are talking about a person or object by using a pronoun, then there is one additional rule: it must go in the middle of the phrasal verb:

As you can see, phrasal verbs are not the easiest part of English to learn because of these pesky rules. However, if you can learn some of them and remember the rules about their use, then you can dazzle a TOEFL / IELTS examiner with your advanced knowledge. This knowledge can give your speaking and writing more depth, and can really help you to pick up more information from a reading or listening passage, so it’s a good idea to study phrasal verbs prior to your next TOEFL / IELTS exam.