Talking About Feeling Sick or Unwell in English 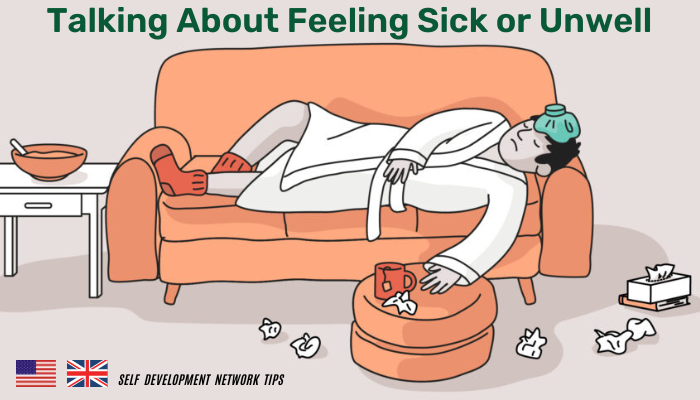 How can you communicate that you are not feeling well in English? When people ask you how you are and you feel unwell, here are a few useful English phrases you can use to talk about feeling sick.

To be coming down with something

When you know you are getting sick you can use this phrase. This phrase is great to use when you're in the early stages of a cold or another kind of sickness.

Example: I've not been feeling like myself since I woke up this morning. I think I might be coming down with something. It's probably just a cold but I should lay low this weekend and focus on getting better.

To be under the weather

When you feel off and you know you have a cold you can use this phrase. It's to show that you are generally not that high in spirits and rather low in energy. This is an informal expression that can be used in both business and casual settings alike.

Example: Judy is staying home this evening to rest. She's been under the weather all week.

To be fighting something

This is a great phrase to use to show that you are currently fighting a sickness (i.e., a cold, the flu, a stomach bug). It can be used when you're not sure of the ailment or you don't feel like going into that much detail if someone asks about how you feel.

Example: Sam is not coming into the office today. I spoke to him on the phone and he sounded terrible. He's definitely fighting something.

To be on the tail end of a cold

This is a great phrase to use when you know that feeling better is just around the corner and that you are almost done fighting a cold. You can say this when you know you're no longer contagious and you're almost fully recovered.

Example: It felt good going to the gym this morning. I feel a lot stronger now that I'm on the tail end of my cold.

I woke up with a tickle in my throat

This is when you're at the beginning of an illness, such as a cold or a cough. When you use this expression it shows that you are potentially getting a cold but it's not necessarily going to fully manifest if you nip it in the bud.

Example: I didn't push it too hard in this morning's workout because I woke up with a tickle in my throat. Since I'm not sure if it's allergies or a cold I want to take it a bit easy today.

To catch a bug

This is a great expression to use when you know you caught something from somewhere but you are not entirely sure what it is. Alternatively you might know the specifics of the sickness (i.e., a chest infection, cold, stomach bug) but would rather not disclose the personal details to someone, in which case you can use this phrase.

Example: I'm pretty sure I caught a bug. My stomach's been off ever since I ate that mystery meat at the cafeteria.

This is when you know you're not your usual energetic self and you're positive that you're not operating at 100% capacity. It could be due to a cold or sickness, but it could also be that you are tired and overworked. It's not clear why you are 100% but you just know that you are not your self and could be fighting something or just utterly drained and need rest.

Example: I'm fine but I know I'm not 100% today. I might try to go home early if I can to nip whatever this is in the bud before it turns into something like a cold.

I think I caught whatever's going around right now

When you use this phrase you are quite confident that you're exhibiting symptoms of whatever has been going around at work, at your children's school or at your gym. This means that you are aware that the common cold, for instance, has affected most of the people you know and since your symptoms are very similar to theirs, there's a good chance you caught whatever they had as well.

Example: Remember when you called in sick last Tuesday? I think I have what you had and I'm pretty sure I caught whatever's going around right now.

You can use these eight Advanced English phrases when communicating to someone that you feel unwell. If you're under the weather and you need to call in sick, you can use one of these phrases to describe however you're feeling.

Practice these expressions and have them handy for when you're not feeling 100% because it happens to all of us!