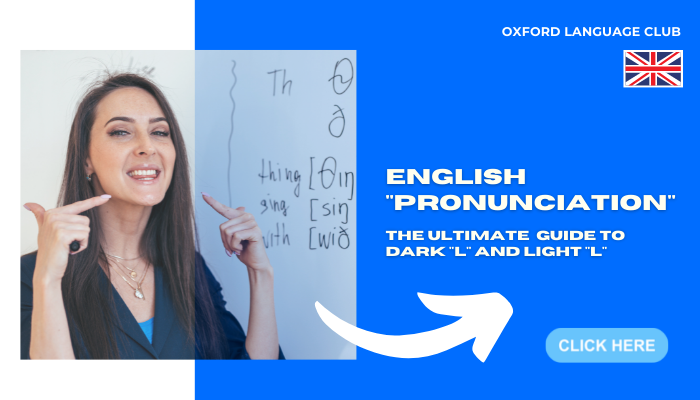 What do travel, musicals, love and language have in common?

They all broaden your world.

Aside from that, they’re all words that contain the letter L.

But those L’s aren’t pronounced the same way.

It’s not obvious, but there are actually two kinds of L in English: the dark L and the light L. For example, the L in “peel” and the L in “leap” have different pronunciations.

A lot of English learners default to saying only one kind of L, which affects the clarity of their communication.

If you’re looking to perfect your English, that means being comfortable with both the dark L and the light L (they have the coolest names among the consonants, too!).

To get you up to speed, we’ve put together a guide below that explains these two variations of the L sound.

We’ll take a look at how they’re pronounced and when to use each.

How to Pronounce Dark L and Light L in English

The English alphabet might only have 26 letters, but these letters can produce a wide variety of sounds. Many of the letters can actually be pronounced in more than one way. With the letter L, you can pronounce it as either a dark L or a light L.

The L that you already know about is likely to be the light L. This is the L that was introduced to you when you were picking up the English alphabet.

Its lesser-known sibling is the dark L, which appears surprisingly often (although it doesn’t get as much attention).

Let’s get to know both of these L sounds:

When to use it: Before a vowel or before the letter Y

How to pronounce it:

1. Put the tip of your tongue on the bony ridge behind your front teeth.

2. Make a sound as you push with your tongue. If you hold this, you’re already saying the L sound as Lllllll!

3. Lift your tongue off the ridge as you move on to the next vowel.

When you’re pronouncing the light L in everyday conversations, it’ll feel like a quick tap with your tongue. Remember to exert enough pressure, though, when you make the tap! A common mistake is tapping way too lightly—the L sound has to be clearly heard.

If a word starts with L, you can be sure that it’s a light L. For example: language, light, love, last, look.

The light L also appears in the middle of a word as long as it’s before a vowel. For example: value, feeling, sunlight, appealing.

Larry left behind a long letter for his friend.

After my language class last evening, I was less nervous about speaking in English.

IPA Symbol: The dark L has its own symbol, which is /?/, but sometimes it’s lumped in with the light L as /l/ in pronunciation guides.

When to use it: After a vowel or the letter Y

How to pronounce it:

1. There’s always a vowel before the dark L. Since it can be tricky to pronounce the dark L on its own, start by saying the vowel, first. With the word “ball,” the vowel would be A.

2. For the actual dark L sound, move your tongue so the tip is reaching up and close to the bony ridge behind the front teeth but not touching.

3. At the same time, the back of your tongue would be arching up a little towards your soft palate.

4. Use your voice now. You know you’re doing it right if you can feel a constriction in your throat as you make the sound!

The easiest to spot placement of the dark L would be at the end of words. For example: ball, spill, fell, patrol, sail.

You’ll also spot it in the middle of words as long as it’s after a vowel. For example: always, almost, salt, style, milk.

If you see L after a TT or DD, that’s a dark L too! For example: bottle, fiddle, little, castle, rattle. This is because as you transition from the T or D to L, you have to make a quick uh sound, which counts as a vowel.

I’d rather send an email to the school instead of trying to call.

They’re having a pool party this fall to welcome new members.

Does It Matter Which L Sound You Use in English?

The quick answer to this is: yes, it does.

If you only use one type of L and ignore the other, this changes the rhythm of how you speak English. Similar to music, English has its own beat and melody. Even with the right words, if your rhythm is off, it’s going to sound a little jarring.

The person you’re talking to will have to put more effort into understanding you because they’re not used to hearing it like that. The worst-case scenario is they might even ask you to repeat what you said!

Regardless of your first language, it’s likely that as an English learner, there’s one type of L sound that you’re much more comfortable with. The other type of L might feel awkward, so you don’t use it as much. Some English learners might not even recognize either the light L or dark L as a sound!

There are tons of examples of this. Just to name a few:

• Russian speakers favor the dark L almost all the time, which can give their English a heavier accent.

• Chinese speakers tend to hear the dark L as W at first.

• Japanese speakers might struggle to tell apart R and the light L.

Because of these language differences, it often pays to check which L variant you’re potentially overusing—and to devote some attention to the other L variant so you can correct any mispronunciations.

Ready to put what you’ve learned about the dark L and the light L into practice? Here’s how you can deepen your understanding of the differences between these two L sounds:

1. Pay attention to your mouth and tongue positioning.

It’s more exciting to jump straight into the vocabulary, but quickly going over your mouth positioning for tricky individual sounds is very much worthwhile! After all, you’ll encounter the L sound in English over and over.

Even though they’re both L sounds, the light L and dark L have differences in their mouth positioning:

• The light L’s mouth positioning is pretty simple—just point your tongue to the bony ridge above your teeth.

To sum it up, the back of your tongue is tense and arching up with the dark L, but not with the light L.

2. Think of the dark L as being made up of two sounds.

There’s a reason why the light L is the one that’s mainly taught to English learners—it’s essentially just one sound.

the dark L is made up of two sounds: uh followed by L. If you say the dark L in slow motion, the uh is produced as you raise the back of your tongue, then the L follows when you raise the tip.

3. Test out your dark L vs. light L skills by reading out loud.

Once you feel like you’ve gotten a grasp of how to pronounce the light L and dark L separately, you can level up to reading full-on words and sentences.

Grab an English book or article (this blog post works, too!) and choose a paragraph. Then, start hunting for words with the letter L.

For each word, ask yourself: is the L here a light L or a dark L?

Read the L words out loud one by one. It’s okay to really slow down and to feel out the word. Your focus here will be on pronouncing it well!

If you’re unsure about your pronunciation, look up the word on an online dictionary and listen closely to the audio for that word. Finally, read the entire paragraph.

This can be really effective as a DIY drill because you’ll get increasingly comfortable with pronouncing both kinds of L.

4. Take advantage of videos and podcasts.

It’s usually easier to think about your pronunciation when you’re reading because you can slow down. But here’s another challenge: bump it up by imitating native speakers in videos and podcasts.

When you’re starting out, you can stick with videos that pronounce words with the L sound one by one.

Tongue twisters are phrases or sentences that even native speakers struggle to pronounce, especially when they have to say the words faster and faster! These usually have similar-sounding words. For example, one popular tongue twister has the words “batter,” “bitter,” “butter” and “better” almost next to each other.

There are plenty of tongue twisters out there that feature the L sound, so you can have a bit of fun with them. Here’s one from Dr. Seuss’ “Fox in Socks” that goes all in with that light L:

This dark L tongue twister is shorter, but it’s still a challenge to say:

For a mix of light L and dark L words, check out these two tongue twisters:

I slit the silk, the silk I slit, and on the slitted silk I fall lightly.

Now that you’ve learned all about the differences between the light L and the dark L, you won’t see the L sound in English the same way again.

In fact, so many of the letters in English can be pronounced in more than one way. The more fluidly you can say all of these sounds, the closer you’ll be to speaking English like a native.