Wrap Your Head Around These 10 Hard Words To Pronounce 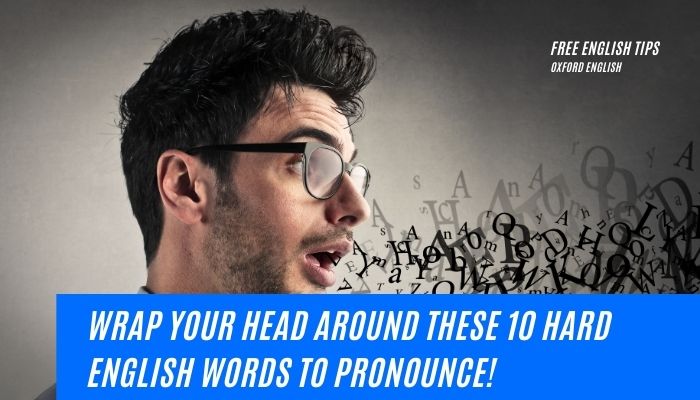 The pronunciation of words in English is not always straightforward. Unlike some languages, such as French or Spanish, there is not always a direct relationship between the spelling of words and how they are said aloud. In technical terms, there is not always a consistent relationship between graphemes (basically, writing units) and their phonemes (sounds) in English. There are a couple of reasons for this. The English language is a wondrous hodgepodge of loanwords, or words borrowed from other languages all of which follow their own conventions for pronunciation, and English spelling was not standardized until relatively recently in its history. For native English speakers and English language learners alike, there are words that are hard to pronounce.

The double C in accessory is part of what makes this word tricky. People are often tempted to replace the C with a single S sound. However, each of these C letters represents a different sound (a “hard C” and a “soft C”). With that in mind, accessory is pronounced [ ak-ses–uh-ree ].

It’s tempting to pronounce the CH in choir with a [ ch ] sound, but that would be incorrect. The word choir is actually pronounced [ kwahyuhr ]. An antique and sadly obsolete spelling of this word is "quire", which is a clearer representation of how it is pronounced.

The word colonel came to English through French, where it was spelled coronel. For historical reasons, which you can read about at our entry for the word, the R was eventually replaced with an L. Keeping this in mind, colonel is still pronounced [ kur-nl ].

In words that have been adopted into English from Greek, it is typical to pronounce all of the vowels. This is how we get the pronunciation epitome, from the Greek epitom?. Unlike many words in English, the final -e here is not silent; epitome is pronounced [ ih-pit–uh-mee ].

The word isthmus presents a challenge of pronunciation when read aloud, because most English speakers would be tempted to pronounce the TH in this word. However, in this case, the TH is silent, making the correct pronunciation [ is-muhs ]. Another word you may be familiar with that has a silent TH is asthma [ az-muh ].

The R sounds in English can be particularly tricky. It can be hard to get your mouth around them. The word juror is pronounced [ joor-er ] or [ joor-awr ]. Pronouncing R sounds in English simply takes practice. Relaxing your jaw and reciting tongue twisters like “Round and round the rugged rocks the ragged rascal ran” can help.

Speaking of R sounds, the R in library throws many people off. They feel tempted to make the first R sound an [ er ], making the word four syllables, as in [ lahy-ber-er-ee ]. However, there is no E in library, so the word is simply pronounced with three syllables: [ lahy-brer-ee ].

As we noted earlier, the R sound in English can be tricky. That’s what makes murderer, with its three R sounds particularly difficult to pronounce. The word is pronounced [ mur-der-er ].

Rural, like juror and murderer, is challenging because of all of its R sounds. Rural is pronounced [ roor–uhl ].