5 of the Strangest English phrases Explained 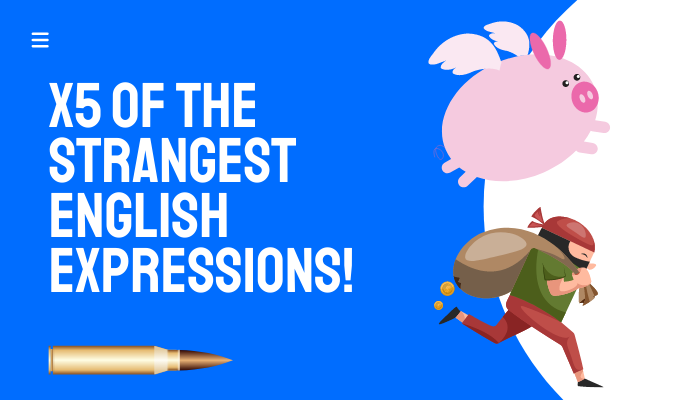 We continue our exploration of the English language by looking at some of the stranger phrases you may hear in conversations. Sometimes these expressions don’t appear to make any sense at all and this is because they have evolved to mean different things. This type of phrase is an idiom – an expression with a figurative meaning that differs from its literal meaning.

Here, we take a look at what some of the strangest English phrases mean – and reveal their origins…

Biting a bullet? What a strange thing to do! This phrase means you’re going to force yourself to do something unpleasant or deal with a difficult situation. It historically derives from the 19th century when a patient or soldier would apparently clench a bullet between their teeth to cope with the extreme pain of surgery without anaesthetic. A similar phrase with a similar meaning, “chew a bullet”, dates to the late 18th century.

Example: “I don’t really want to exercise today, but I’ll bite the bullet and go for a run.”

We all know that pigs can’t fly, which is why people use this expression to describe something that is almost certain never to happen. It is said that this phrase has been in use since the 1600s, but why pigs? An early version of the succinct “pigs might fly” was “pigs fly with their tails forward”, which is first found in a list of proverbs in the 1616 edition of John Withals’s English-Latin dictionary, A Shorte Dictionarie for Yonge Begynners: “Pigs fly in the ayre with their tayles forward.” Other creatures have been previously cited in similar phrases – “snails may fly”, “cows might fly”, etc, but it is pigs that have stood the test of time as the favoured image of an animal that is particularly unsuited to flight! This phrase is also often used as a sarcastic response to mock someone’s credulity.

Even if you don’t have an uncle called Bob, you might still hear this idiom! Its origin comes from when Arthur Balfour was unexpectedly promoted to Chief Secretary for Ireland by the Prime Minister of Britain, Lord Salisbury, in 1900. Salisbury was Arthur Balfour’s uncle (possibly his reason for getting the job!) – and his first name was Robert. This phrase that is used when something is accomplished or successful – an alternative to “…and that’s that”.

Example: “You’re looking for the station? Take a left, then the first right and Bob’s your uncle – you’re there!”

This phrase is commonly used to refer to something that seems to be a copy of something – mainly if someone looks like another person. The often-repeated story about the origin of this phrase is that many years ago people were sometimes buried alive because they were presumed dead – when actually they were still alive. To prevent deaths by premature burial, a piece of string would supposedly be tied to the finger of someone being buried – and the other end would be attached to a bell above ground. If the person woke up, they would ring the bell – and the “dead” ringer would emerge looking exactly like a person who was buried only a few hours ago! Other stories point to the practice of replacing slower horses with a faster horse – “ringers”. In this case, “dead” is used to mean “exact”.

Example: “That guy over there is a dead ringer for my ex-boyfriend.”

Off the back of a lorry

This is a way of saying that something was acquired that is probably stolen, or someone is selling something that’s stolen or illegitimate. It can also be used humorously to emphasise that something you bought was so cheap that it must have been stolen! “Lorry” is the British version – in the US, things fall off the back of “trucks”. An early printed version of this saying came surprisingly late in The Times in 1968. However, there are many anecdotal reports of the phrase in the UK from much earlier than that, and it is likely to date back to at least World War II. It’s just the sort of language that those who peddled illegal goods during and after WWII would have used.

Example: “I can’t believe these shoes were so cheap – they must have fallen off the back of a lorry.”