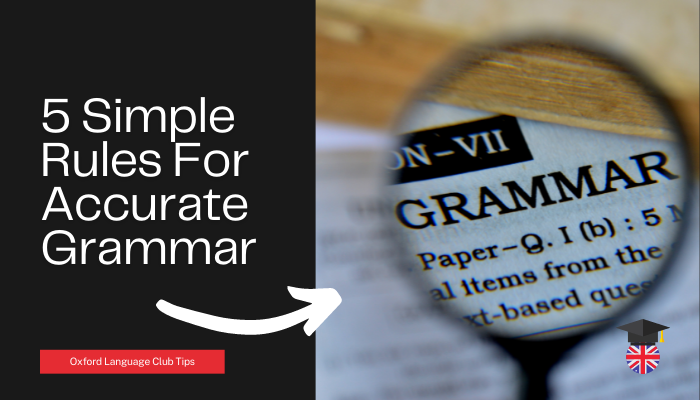 The ‘problem’ with English grammar isn’t that it’s very complex or difficult – at least, compared to some other languages. The problem is that there are always lots of little rules – and many, many exceptions.

So how do you deal with this problem? You have two choices:

Here are five simple rules for accurate English grammar that will help you feel more confident when you speak.

Only one determiner at a time

‘Determiners’ are words that come before nouns. Examples of determiners are articles, possessives, and words like “this” or “that”.

The general rule is that you can only have one of these words before a noun.

Prepositions are followed by nouns / pronouns

Only one auxiliary at a time

The Present Perfect is a present (not a past) tense

It helps to think of the “have done” form as a present, rather than a past tense. This means that there’s always a connection to the present when you use the present perfect. For example:

“I’ve been here for a week” (so although I arrived here a week ago, I’m still here)

“I’ve passed my driving test” (so although I passed the test recently, I can now drive legally)

On the other hand, if you include a time reference, you can’t use the Present Perfect. So:

“I went there last summer.”

“I passed it on Tuesday.”

Negatives are single, not double