7 Most Shocking Things About English Pronunciation 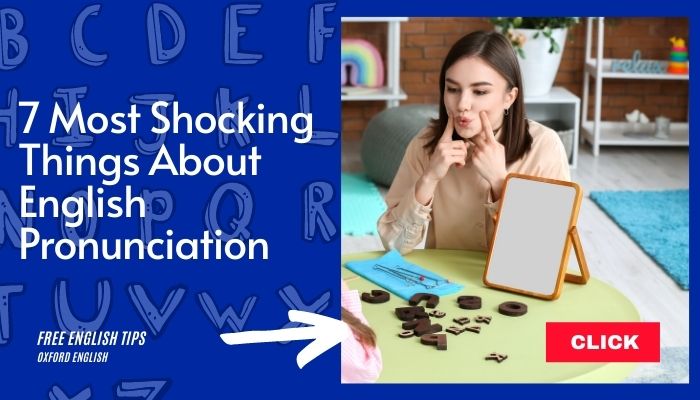 Accent is the combination of intonation (music or rhythm when speaking), liaisons (connecting words) and pronunciation (sounds of vowels and consonants).

1. English is a horrible mix of languages and dialects

Twenty nine percent (29%) of modern English words have a Latin root; the same percentage applies for French influence and close is Germanic with 26%. The other 16% includes Spanish, Italian, Celtic, Indian, Arabic and Greek. Here are some Foreign Language influences in English. We used the word “horrible” because you can imagine that with all these languages combined; there is no pronunciation rule that works 100% of the time.

3. Pronouncing words with one vowel in a syllable (use relative vowels)

If there’s one vowel surrounded by consonants in a syllable it is pronounce with its relative vowel. This is common with short words such as add, set, pin, hop or cut.

4. Pronouncing words with two vowels in a syllable (use alphabet vowels)

When there are two vowels in one syllable, the first one uses the alphabet vowel sound and the second is silent. Some examples are: change, seat, pie, note, rude.

Here is a interesting example that illustrate the usage of 1 vowel (with relative vowel sound) or 2 vowels (with alphabet vowel sound).

Voiced are all the sounds that make your vocal cords vibrate when pronounced. Fortunately, almost every vowel and consonant in English are voiced. There are only 7 exceptions that are know as un-voiced or voiceless: F, K, P, S, T, SH and CH. Why do you need to know this? Well, you will need it to know how to pronounce the verbs in the past tense next.

5. 1. Verbs ending with a T or D sound – Add the extra syllable -ed to the word and pronounce it like –id

5. 2. Verbs ending with a Voiced sound (vocal cords vibrate) – Add only a D sound at end of the verb to pronounce it in the past.

This is another tricky one. There are 2-syllable words in English that are pronounced differently depending if it’s a noun or verb. The rule is that 2-syllable words have the stress on the first syllable, except for verbs.