At a rough guess: talking about approximate numbers and amounts 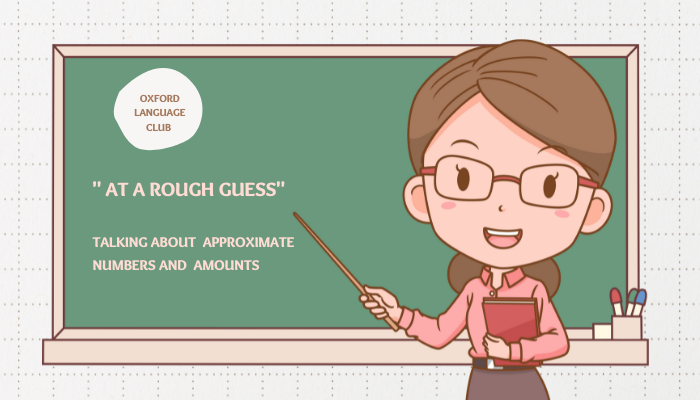 We often need to talk about amounts and numbers that are not exact, either because an exact figure isn’t needed or because we don’t know it. This article looks at some words and phrases for doing this.

The most basic and common way is to use the prepositions "around" or (especially in British rather than American English) "about". We can also say "round about":

There were around 50 deer in the herd.

The talk will last about 30 minutes.

She lives round about a mile from the office.

The adverbs "approximately" and (slightly less formal) "roughly" express the same idea. We can also use the phrase "roughly speaking":

Roughly speaking, 40% of households will benefit from these measures.

Sometimes we show the idea that a figure we have just given is approximate by adding a phrase such as "or so", "or thereabouts" or "more or less":

We had to wait for five minutes or so.

You will need five metres of fabric or thereabouts.

We picked three kilos of strawberries, more or less.

The suffix -ish can be attached to numbers to show that they aren’t exact. This is often done to talk about someone’s age:

Her parents are sixtyish.

The phrase "give or take" is often followed by a smaller amount or number than the one you have just given. It can also be used on its own after the first number:

I spent two years there, give or take the odd day.

There were a thousand people there, give or take.

We often express the idea that a figure is approximate by using phrases such as "(somewhere) in the region/area of" or "something like":

I have seen somewhere in the area of forty patients with this condition.

He went on a diet and lost something like 20 kilos in six months.

Finally, we can indicate that we are not quite sure of an exact amount by qualifying what we say with a phrase such as "at a (rough) guess, I’d say" or "I’d guess":

At a rough guess, I’d say she earns twice as much as me.

I’d guess there were over 400 people at the event.