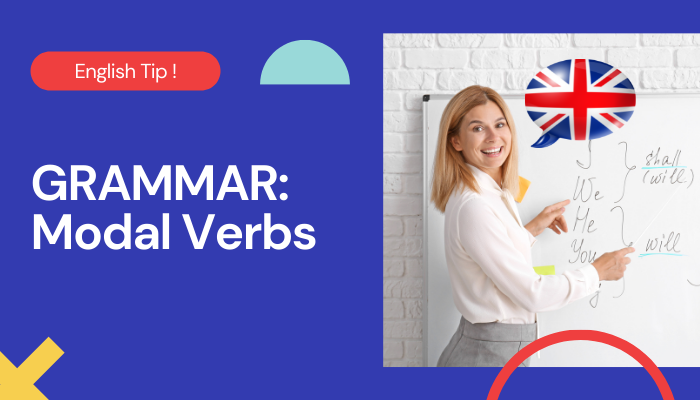 A modal verb is like a flavoursome ingredient in a recipe; a dose of garlic. Our spaghetti bolognaise might be perfectly acceptable in its un-garlicked form. But it is transformed by the addition of a clove of the Vampire defeating food. When we learn English language online, understanding how verbs are used in English is crucial to developing fluency in the language.

Like the bulbous garlic, modal verbs change other verbs in a sentence. In fact, they make the sentence adopt to one of the following four purposes:

There are ten main modal verbs. Here is the modal verb list:

Let us look at each modal verb in turn:

This verb is used when the certainty that something will be done is to be communicated.

I will pay my student fees.

When the modal verb ‘will’ is used, that means that the action is certain to take place.

The modal verb ‘would’ indicates a condition. It is possible that the action will take place, but another condition has to be met. The phrase including the modal verb will be followed by a connective such as ‘if’.

I would pay my student fees if I had the money in my account.

‘Would’ is used in the past tense.

3. Should and Ought to

I should pay my fees, but I have not gotten around to doing it.

The slight difference between the two modal verbs is that ‘ought to’ implies slightly less of an obligation than ‘should’.

I ought to go to the bank to pay my fees, but I have a bad cold.

‘Could’ is a modal verb that indicates the ability is there to complete an action. However, the implication is offered that there is a reason for not having done what is required.

I could pay my fees. I have chosen not to.

This is a powerful verb and is often used to imply a problem.

This is a modal verb which has a double purpose. It indicates the permission to do something. It also shows that there is the possibility that something may happen.

When used to give permission it will often appear in a simple clause, sentence or phrase.

You may pay my fees on my behalf.

As we have seen, the verb can also be used to show the possibility that something will happen.

My fees may be paid.

In this sense, the verb is interchangeable with might, although it implies a stronger likelihood of something happening.

‘May’ cannot be used as a verb in the past tense.

This model verb demonstrates the ability to undertake an action.

My fees are overdue. I can pay them on Monday.

‘Can’ cannot be used as a model verb in the past tense. The word states that something will happen, rather than has happened.

This verb shows that something will happen. However, a condition is often implied. Often the connective ‘when’ is used to connect clauses if ‘shall’ is the form of the verb used.

I shall pay my fees as soon as my funds clear.

The modal verb ‘must’ says that something will definitely be done, or happen. It is a stronger word than will, implying that the action to take place is extremely important.

I must pay my fees, or I will not be allowed to attend lectures.

This modal verb implies the possibility of something. When ‘might’ is used, the outcome is in the balance. The implication is that something could happen, or perhaps it will not.

Often there is a hidden implication that there is a reason why the action will not take place.  Sometimes, that reason will be made explicit.

I might pay my fees. It depends on whether my classes get better.