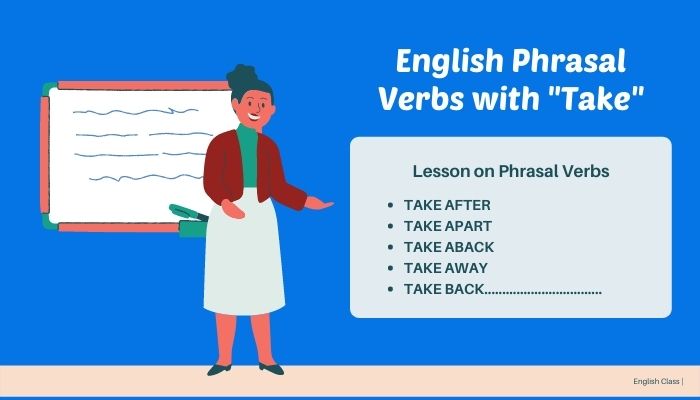 A phrasal verb is a verb followed by a preposition or an adverb. The combination creates a meaning different from the original verb.

In this article we will show you 16 phrasal verbs with ‘take’  with their meaning and example sentences.

We were taken aback by the news.

His voice was so loud that it took us aback at first.

She’s very funny. She takes after her mother.

He takes after his father’s side of the family.

He took my phone apart to fix it.

They will take our report apart and then give us feedback.

Take that table away as we don’t need it in here.

They took away my passport so I can’t travel.

Six take away four is two.

We ordered Chinese food to take away.

What I took away from that film is that neither side wins in a war.

Take away from something

The drunken fight after the party took away from the celebration.

He became very aggressive so we called the police and they took him away.

The dress was too tight so I took it back to the shop.

I took back my jacket from Sarah.

He cheated on her but she finally took him back.

Takes you back (British English)

Playing that game took me back to my childhood.

He took down the book from the top of the bookcase.

After the music festival, they took down the stage.

She took down John’s number so she could call him back.

The journalist took the politician down with her difficult questions.

My brother would easily take you down in a fight!

Court is adjourned. Take him down.

You took me for an idiot.

She looks very mature so I took her for much older than 14.

He had nowhere to go so she took him in.

The police took him in for questioning about the robbery.

She lied! I can’t believe I was taken in by her.

It was a very good speech and I took it all in.

When she walked into the room she took it all in.

Some plants take in a lot of water and can’t grow in dry places.

She took in her dress as it was too big.

It was a successful year as the company took in £1.5 million.

The book takes in the period between the First and Second World Wars.

The plane took off at 2pm.

Her career took off.

He took off before I had a chance to say bye.

She takes off her mother so well.

The program was taken off TV because it wasn’t very popular.

It was hot in the room so he took off his jumper.

She took a week off to go and visit her family.

I took on the project.

I went for the interview last week and now they’ve decided to take me on.

Germany will take on Mexico in the first round of the World Cup.

We can only take on five more passengers at the next stop.

I got my wisdom tooth taken out.

I took out my wallet from my bag.

She took out a loan from the bank.

Do you want that to eat in or take out?

David took his girlfriend out for dinner.

His entire army unit got taken out in Afghanistan.

Take it out of you

The journey to work this morning was a nightmare! It really took it out of me.

Take something out on someone

Sorry, I was very upset yesterday and I took it out on you.

When the protests started the army took over.

Take over from something

Her desire to win took over.

Take over from somebody

Susan is taking over from Anna as manager.

13. TAKE someone THROUGH something

Let me take you through the instructions for the exam.

If you don’t understand what you’re meant to do, I can take you through it.

It was only the teacher’s first class but the students really took to him.

She took up swimming and started going twice a week.

When she read about the libraries closing, she took up the issue with her MP (Member of Parliament, local politician).

He will take up his position next week.

He was offered a promotion at work and, although it was a lot more work, he took up the challenge.

I know you’re busy so I won’t take up too much of your time.

She took up a position in the corner of the room.

When David left the police, Anna took up his unfinished case.

Take somebody up on something

Take something up with somebody

If you’re unhappy with the service, you’ll have to take it up with my manager.

16. TAKE it UPON oneself

He took it upon himself to show the guests around.

I took it upon myself to give him the bad news.