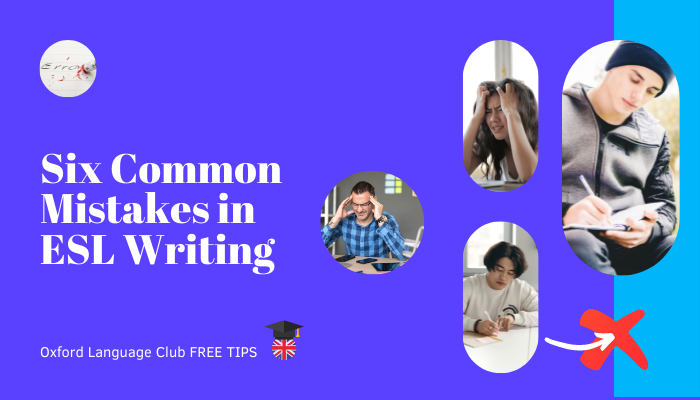 When you’re learning English, one thing that might be holding you back is fear of mistakes.

Wouldn’t it be great to know what the most common errors are, so that you can avoid them? In this article, you’ll learn about 6 common mistakes that English as a Second Language learners tend to make and how to avoid them.

One of the more common problems seen in ESL writing is unnecessary switching between past, present and future tenses. Changing between verb tenses within a sentence can make it difficult for the reader to follow a piece of writing and should be avoided. An exception to this is when a time change must be shown.

To ensure that you avoid this problem, keep the following in mind:

While there is no set rule for the number of sentences a paragraph should contain, it is possible to have paragraphs that are too long. Excessively long paragraphs are one of the more common problems seen in ESL writing. The problem can easily be avoided if you adopt a conscious attitude towards it.

Practical tip: As a rule of thumb, two to five paragraphs per A4 page works well (assuming single line spacing). Also, try to keep each paragraph to a single main idea or topic.

The subtle spelling differences between British English (BrE) and American English (AmE) spelling can be difficult for ESL writers to spot. It is important, however, that you write in the appropriate spelling style for your audience and that you remain consistent.

A common issue found in ESL writing is for the author to interchange between UK and US English spelling, i.e. they spell some words in the British form and others in the American. The most frequent instances are:

as in "organise" and "organize"

Practical tip: this issue can easily be solved by ensuring that you have MS Word's spellcheck on the appropriate spelling setting.

4. Writing in the first-person in academic contexts

Writing in the first-person in an academic context can make a piece of writing read as informal, subjective and biased; it is a major no-no in the context of academic writing. It is an established convention that academic writing should be done in the third-person, and breaking this rule will cost you precious marks.

I would argue that Smith’s (1992) research was biased as he was personally invested in the positive outcome of the results.

It can be argued that Smith’s (1992) research was biased as he was personally invested in the positive outcome of the results.

Practical tip: to ensure that you are writing in the third-person, avoid making personal statements and using personal pronouns such as "I/me/my" etc.

The rules of capitalization in English may seem confusing, especially to non-native speakers. Issues with incorrect or missing capitals in ESL writing are regularly seen. Stick to these basic rules:

Here is an example of these bad capitalization issues (in order 1-5):

"This year i will be going to london to study at University. my visa application still has to be accepted but i have been told to expect it to arrive in january."

The correct capitalization would be:

"This year I will be going to London to study at university. My visa application still has to be accepted but I have been told to expect it to arrive in January."

Practical tip: be conscious of the differences between proper nouns and common nouns as these represent the most common capitalization issues amongst ESL writers. For example, "car/truck/lorry/van" are common nouns, while "BMW/Mercedes/Ford/Toyota" are proper nouns.

6. Incorrect use of articles

The improper use of definite (the) and indefinite (a/an) articles is a common problem for ESL writers. The best method for avoiding this issue in a sentence is to first consider whether it contains a countable or uncountable noun.

The definite article "the" should be used in front of singular and plural nouns and adjectives when referring to something that both the author and reader are familiar with. "A dog" is in reference to a single unspecified dog, while "the dog" refers to a particular dog.