Why it’s important to learn English 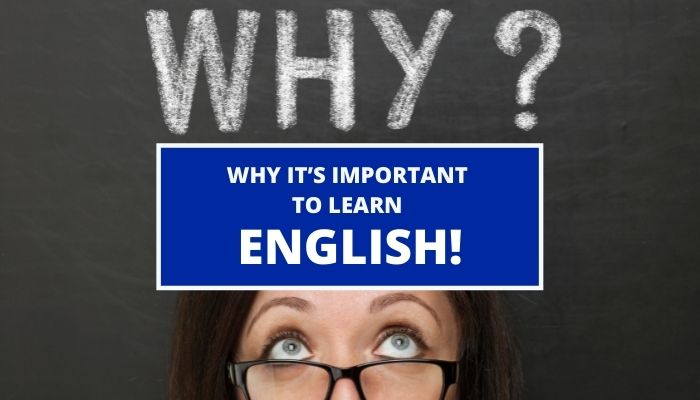 Learning English is important, but firstly, why is it a good idea to learn any new language?

Learning a new language can be an enjoyable experience at any age. People learn new languages for many different reasons, such as travel or work, and the benefits can be incredibly worthwhile, whatever the reason.

Studying a foreign language can increase cultural knowledge and can help you feel more confident when travelling.  It’s also a fact that learning a second language improves brain functionality.  Studies show that people who speak more than one language have improved memory, problem-solving and critical-thinking skills, enhanced concentration, ability to multitask and better listening skills.

Sounds great, right? So, now you know that it’s a good idea to learn a language, why is it important to learn English?

1. English is a global language

English is spoken at a useful level by some 1.75 billion people worldwide – that’s one in every four! Being able to speak English is not just about being able to communicate with native English speakers – if you want to speak to someone from another country then the chances are that you will both be speaking English to do this!

2. Studying English can help you get a job

English is the language of science, aviation, computers, diplomacy, and tourism. Knowing English increases your chances of getting a good job in a multinational company within your home country or of finding work abroad.

3. With English, you can study all over the world

Since English is spoken in so many different countries there are lots of schools and universities around the world that offer programmes in English. If you have a good level of academic English, there are lots of opportunities for you to find an appropriate school and course to suit your needs. In addition, many of the world’s prestigious universities are situated in English-speaking countries such as the United Kingdom, United States and Australia. To earn a position at one of these prestigious universities it is paramount to be able to read, write, speak and listen in English.

4. English is the language of the media industry

If you speak English, you won’t need to rely on translations and subtitles anymore to enjoy your favourite books, songs, films and TV shows!

5. It is the language of the Internet

English is also a particularly important language online with the highest percentage of content on the internet written in English. As well as this, some of the world’s largest tech companies are based in English speaking countries.

6. It will help you to understand other languages

Generally speaking, English is one of the easiest languages to learn with its simple alphabet. And once English is mastered you will have developed abilities and practices that you did not have before. These skills will transfer to any other language that you learn.

7. Travelling is a lot easier with a good knowledge of English

Even if you are in a country where English is not the official language, chances are that English will still be used as a tool for communication!

8. You can learn more than just the language!

Good knowledge of English will allow you to access films, music and literature from hundreds of countries around the globe. Not to mention the fact that numerous books from across the world are translated into English. Therefore, by understanding English, you are unlocking the door to a whole world of new information and knowledge!