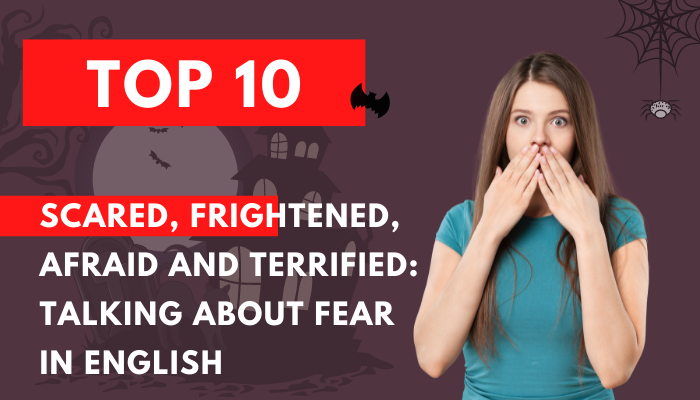 Let's start by looking at the common ‘synonyms’ "afraid", "scared" and "frightened". One of the things we frequently do with our students is ask them for other words in the same word family because this is a skill they are likely to need in English exams.

One of the most difficult aspects of English is that words which seem like synonyms can have important differences. For instance, adjectives of feelings or emotions that can be formed with -ed to describe people and -ing to describe the things that cause the feelings and emotions.

"Frightened" and "frightening" are good examples:

The noises were frightening. / It was dark and I was frightened.

The same pattern works for the more emphatic adjectives "terrified" and "terrifying":

The storm was terrifying. / She’s terrified of dogs.

However, we do not use this pattern for "scared" or "afraid". Something that makes us scared is scary and there is no related adjective for afraid:

The high waves were really scary. / He’s scared of the dark.

The masks were designed to terrify their enemies.

However, there is no verb associated with "afraid".

"Scared", "frightened", "afraid" and "terrified" are probably the most common adjectives to describe feeling fear, but if you want to broaden your vocabulary, there are many other useful alternatives.

"Petrified" is a very strong word, and also has the corresponding word petrifying:

Jumping out of the plane was petrifying. / I was absolutely petrified.

We often make the word "scared" stronger by saying we are "scared stiff", and if someone is so scared that they cannot think clearly and do not know what to do, we can say that they are "panic-stricken".

If someone is slightly afraid of something that is going to happen in the future, we could describe them as "apprehensive". A "timid" person is shy and nervous, while a more negative word for someone who is not brave is "cowardly", usually implying that they were too scared to do what was morally right.

Finally, there are several colourful idioms and phrases we use to describe feelings of fear. We can say: